This week, we celebrate–as we damn well should–the 50th anniversary of the successful Apollo 11 mission to the moon in 1969. That was, in this historian’s not-at-all-humble opinion, the single coolest thing human beings have ever done. The launch of such a massive vehicle out of Earth’s gravity, to the moon, and back required the most powerful engines ever built–the Saturn V F1 rocket engines, developed under the supervision of Wernher von Braun, director of the first successful effort to develop a rocket capable of delivering a payload to a predetermined target: the Aggragat 4, or A4, better-known as the V2, a medium-range ballistic missile used by Nazi Germany against Allied cities in the latter months of the Second World War in Europe.

The Saturn V F1 was the culmination of everything von Braun and his team had learned through trial and error in thirty years of research, production, and testing–combined with all the money the U.S. Government was willing to spend on the project–which, for a time, was anything the rocket men asked for. One of the Apollo astronauts recently observed that we can accomplish just about anything if cost is no object. 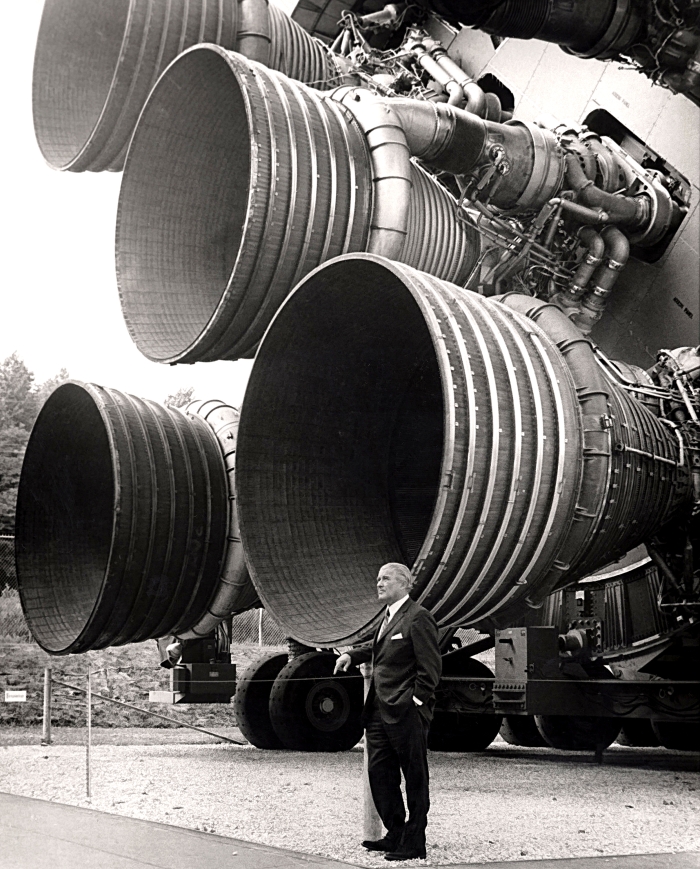 The Saturn V was just magnificent. Its five F1 engines, making maximum thrust, developed 32,000,000 horsepower. Thirty-two million horsepower. That makes me smile like a happy simpleton. And we think a 500-horsepower car is a beast.

It was built by humans, though, not gods, and no one could fault you for assuming that every single detail of its design and construction was documented and filed for posterity. I certainly assumed that.

Then I watched this Curious Droid video last week …

… and learned that, actually, it wasn’t. Such was the rush to get the thing operational, to get the moon mission done by 1970, to honor the murdered President and beat the Soviets, that each F1 was somewhat different–somewhat hand-built, at a time when computer-aided design was science fiction and the most powerful thing humans had ever built that didn’t involve a nuclear reaction was basically the refinement of 1940s technology.

So, when current rocket scientists went back to the F1 plans to consider the feasibility of building them again, they determined that it was not possible. Too much of what made the engine work was in the brains of the engineers who built each one, individually, and in their hurried scribbling on napkins and scraps of office paper, long thrown away.

We can build a close approximation of the F1–a version designed with computer software, the techniques we are accustomed to, rather than those they were accustomed to in 1969. We do certain things a certain way and they did those things differently. Their engine worked. Our engine would work too. But we cannot feasibly replicate the original, because our skills are different from theirs. The fire control team on the USS North Carolina in 1944 would not be able to work the fire control system on the USS Zumwalt in 2019. But the team on the Zumwalt would not be able to work the North Carolina‘s, either. They weren’t trained to.

The F1 engine is a perfect modern example of something central to the history of technology, which is what I do. Technological know-how, like every other aspect of human history, is largely non-linear, despite our unshakable tendency to think of our own history in linear terms. Technological history is not predetermined. Nor is any other aspect of history. The same goal can be accomplished in different ways, and those ways are shaped and guided by the culture doing the shaping and guiding of the technology.

Also, the skill of the artisan–the knowledge carried in the head of an individual human, which is slightly different from that carried in the head of any other human, and which that human can apply to the manipulation of objects–has survived longer than one might assume in our age of blueprints, engineering degrees, precision machining, and mass production.

In fact, mass production and artisanal skill are not mutually exclusive. I would argue that artisans are working, right now, on the floor at the Honda plant in Ohio and in the machine shop at GE Aviation in Wilmington. “Continuity more than change is the human condition,” wrote Henry Glassie.

When these people retire or die, their skills leave the shop with them. They cannot entirely be put into a set of plans, a book, or a tape recorder. The only way to preserve them is to transmit them directly into the brain of another human through a process we traditionally call apprenticeship.

When we undertake the reconstruction, or merely the interpretation, of a human contrivance from the past, whether it is a 17th-century ship, a First World War fighter plane, or a Saturn V rocket engine, our top challenge is to understand how they built what they built, without possessing the skill set they had. Sure, plans and documentation are a great help, but they are not sufficient. That is why the techniques for understanding artisanal craft are just as important for historians of modern technology as they are for those of us who spend most of our time in the age of planks and sails and hemp rope.

A true understanding of any past technology, then, requires much more than the ability to locate documents and read them. It requires more than the ability to make sense of what immediately meets the eye at an archaeological site. It requires educated guesswork, experimentation, and a thorough understanding of the culture that built the technology–its skill set, its tastes, its prejudices.

Without those abilities, the best answer historians would be able to give to the question “How did we go to the moon 50 years ago?” would be “We don’t know.”

Or, perhaps more tellingly, “We forgot.”

2 thoughts on “Wooden Ships and Rocket Engines: How Skills Live and Die”