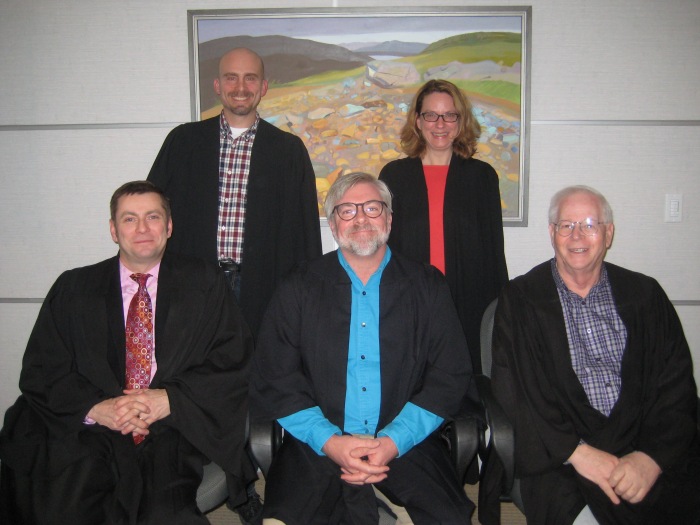 Right after dissertation defense, 8 February 2017; Skip Fischer is on the far right in the picture. Neil Kennedy is on the far left. In the back are Barry Gaulton and Danine Farquharson. You can figure out which is which.

It’s been a while; here’s a brief run-down of what’s in the pipeline right now.

First, though, it’s only proper for a professional maritime historian to acknowledge the death on 11 February 2018 of one of our field’s guiding lights, Professor Lewis “Skip” Fischer, co-founding-editor of both the International Journal of Maritime History and of The Northern Mariner/Le Marin du Nord. When I got accepted to study maritime history at Memorial University, where Skip had taught since I was in about sixth grade, I was hopeful that I would get to work with him at some level. I must admit I was a bit intimidated when my advisor, Neil, first took me over to meet him, but I needn’t have been. He was simultaneously warm and frank, in a way that I try to be. He let me know that his approval, based on his old friend and my old professor Carl Swanson’s recommendation, was why I was there, and that he had every confidence I would do well based on that recommendation. I read the technical history of the ship for Skip, and our one-on-one discussions were of course a great privilege. I learned that he was generous, sometimes to a fault, with students, though he was quite clear about what he considered good work and what he did not. The man truly was a walking library. His office mirrored that externally; to find him, you had to navigate a warren of bookshelves with barely room to turn around between them. It’s Neil’s office now, and it looks quite different.

All of us who were trained at any level by him, mentored by him, lectured by him, are lucky. The maritime history world is only beginning to celebrate his life and work.

Meanwhile, we do what he would want us to do: keep working. Neil was kind enough to tell Skip, a few days before he died, that my book manuscript was coming along well, and indeed it is. I will do everything I can to get Sea Venture: The Merchant Ship and the British Atlantic, 1600—1800 in a publisher’s hands, and a contract in my own, by the end of this year. I’m happy to have received a small but important grant from the Anderson Bequest of the Society for Nautical Research for some research assistance in Bristol and London, and that is underway now. I also just found out that an edited collection, Cultural Economies of the Atlantic World: Objects and Capital in the Transatlantic Imagination for which I will be contributing a chapter, “Conveyance and Commodity: The Ordinary Merchant Ship in the British Atlantic, 1600—1800,” was accepted by Routledge and should be forthcoming next year. (These things take a long time.)

I’ve got a few conferences in mind for this year, including the Society for the History of Technology’s in St. Louis in October, for which I have proposed an open session and actually have an interested collaborator! We hope to get more in the next couple of weeks. I’m also applying for a major fellowship from them. As my intellectual direction continues toward histo-techno, I hope to make a contribution to that field at the same time as I hope this project makes toward early America and the British Atlantic.

Thanks for checking in and stay tuned. If you care for maritime history, please raise a glass of something good to Skip Fischer.