We got home two days ago from a ten-day research trip to Chestertown, Maryland, funded by a Carter Fellowship from the Early American Industries Association. My second book project is a “biography” of sorts of HM Schooner Sultana, built at Boston in 1767 and used by the Royal Navy as a customs-enforcement interceptor on the Eastern Seaboard between 1768 and 1772. Because the Navy prepared accurate draughts of her hull and rig, made a detailed inventory of her equipment and specifications, and preserved her logs and muster books, we have a record of this vessel unheard-of for a similar vessel in normal merchant service. Based on that information, a dedicated group of people designed, built, and launched a replica of Sultana between 1999 and 2001, and she has operated as an educational vessel on the Chesapeake ever since, supported by the Sultana Education Foundation. During the design process, the Sultana group ordered copies of all the official documents pertaining to the original schooner from the Public Record Office in London. It is those documents that, thanks to the generous hospitality of Drew McMullen, Executive Director of the Foundation, and his staff,who were all friendly and supportive, I have been allowed to read. 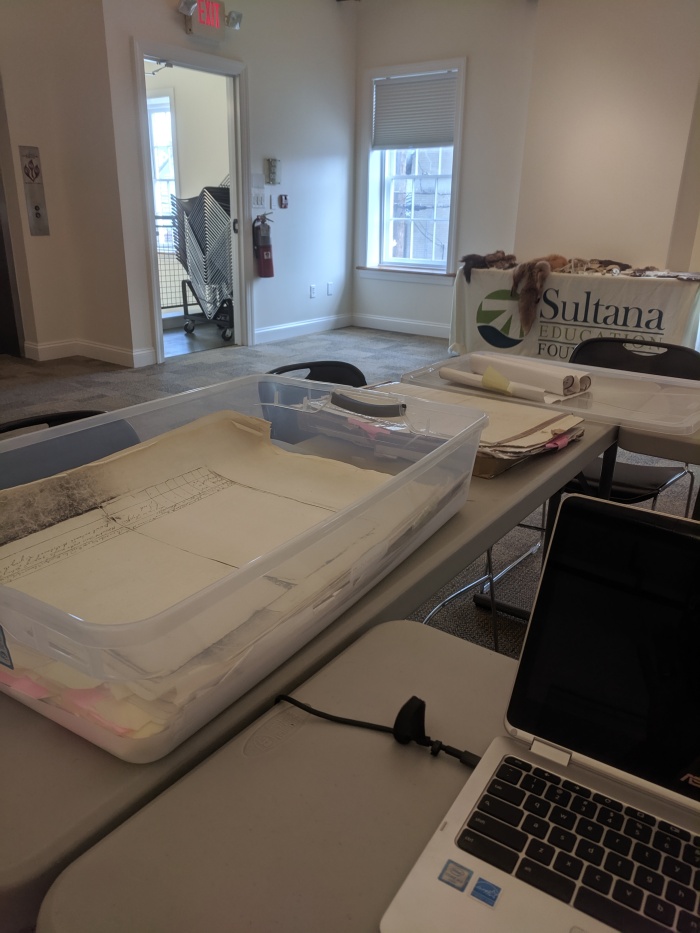 Sultana had  both a sailing master, David Bruce, and a commander–Lt. John Inglis, an American who would remain loyal and eventually retire from the Navy as an Admiral. On this visit, I got through Bruce’s log, which covers every day of the schooner’s constant service from July of 1768 until early December 1772. Through the sometimes-almost-inscrutable handwriting and “creative” orthography, I got a terse summary of day-to-day events far too demanding for our modern sensibilities of risk tolerance and comfort, from the harrowing gale-lashed passage from Deptford to Halifax, to the boarding and searching of merchant ships up and down the East Coast of North America in all conditions, keeping a crew of 25 on a vessel too small for that many men, with rampant desertions, occasional impressment, a few floggings, and at least two deaths, before a second transatlantic in the other direction which, like the first, almost proved disastrous.

Sultana was part of an effort to enforce the Townshend Acts, themselves intended as instruments of a reformed British Empire able to meet the substantial challenges of its sudden post-1763 expansion and its depleted Treasury. She and her sister vessels were effective–perhaps too effective–in this role, subjecting British American maritime commerce to a constant scrutiny to which it was not accustomed. The resentment created by the use of naval vessels for commercial policing ratcheted up tensions between London and America–and between Americans of differing stations and opinions–to a dangerous degree.

I am applying for funding to return to Chestertown for two more weeks of reading, and I will post updates on this project here from time to time. Thanks for reading, and if you are interested in knowing more about Sultana and the Foundation that operates her replica, visit http://www.sultanaeducation.org.